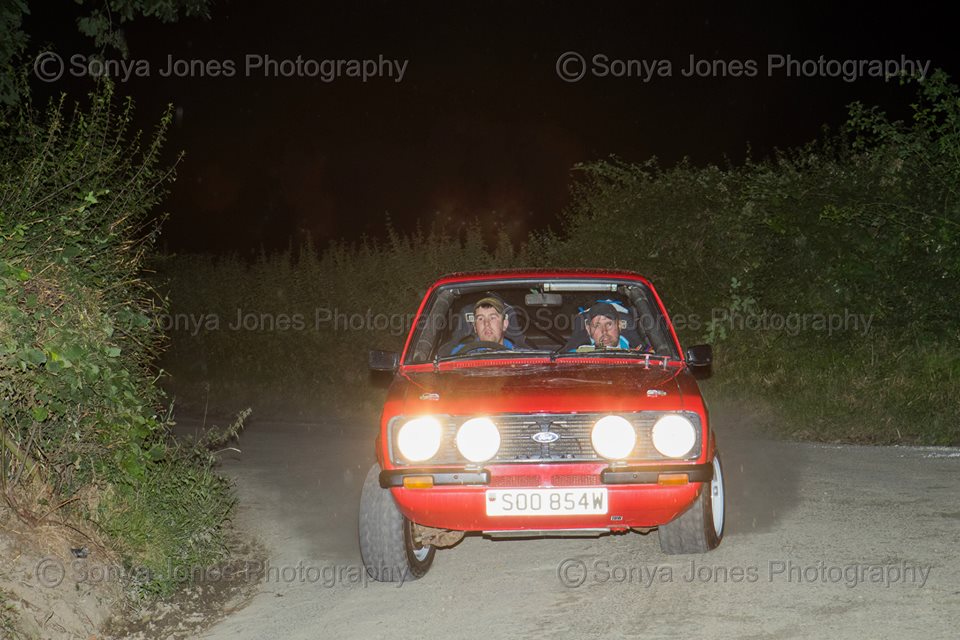 Last weekend saw the annual jaunt to Tregaron for the Barcud Road Rally, an event that I’m still yet to finish! After last year’s marshalling duties after the car breaking down the day of the event was good, but this year I wanted to get back out and give it another go.

This year was the launch of Rhys McLoughlin’s newly built Peugeot 205 GTi, the car I’ll be contending the Welsh championship in next year (if Rhys will put up with me!) After travelling up to Rhys place on Friday night and a quick blast out in the car I knew it was an animal, being out of practice didn’t help off the start line!

Noise, Scrutineering and Signing On all went smoothly, a quick stop off at the Basic Roamer Company’s tent to sort out my flashing potti and we were set for the night. Thanks to Gary Taylor for heading up to Marshal for us on the event!

As usual a quick drive down the road out of Tregaron to Pen-y-bont to plot out of the sight of spectators to keep them in decent places. 88 minutes was more than enough time to get the route down onto the map and we were ready to go.

The first section started on map 135 just North West of Wenallt. Unfortunately for us we had a random Nissan Micra in front of us which we soon caught, down to the first PC and across the A485 down to speccy point 1, a quick slot 45 right at a crossroads followed by a fast road up to TC2. Cleaned it by a few minutes! Nobody dropped any time on this section as it was fairly straight and good to ease everyone into the night.

The second section and the first dropper started just North of Pentre-llyn. A few 90’s with a couple code boards were along this road to slow everyone down. Barcud MC had decided to place a control board just in front on the code board, making it quite hard to read them! The first one also being along the lines of S55S 5S5… Nice and easy in the small box provided! 5 of the top crews cleaned the section while Richard Stepney & Carwyn James (Impreza) put in the quickest class 2 time of just 5 seconds. Quickest novice’s were Dafydd Evans & Richard Hughes (Escort) dropping 12.

The next section started along the mast road near Rhydyfelin. Along the lane and across the A487 and down to Brynhir into TC6, another fast section with a great slot off the main road. Again most people cleaned this section, even we did following a slow Ford Ka for a while. A short trip up the B4576 took the competitors to TC7 for the next section. Down across one of the roughest whites I’ve been down on a road rally, and the end of our night! The ruts and the rocks in the middle of the road taking a good battering and taking our exhaust off with it at PC5. Rather than damaging it any more we retired there and then. Thanks to the local farmer who dropped Rhys back to Tregaron, even his Landrover 90 bottomed out further up the white! (I think the 4 cars retired along the one white says a lot as well…) after the white and a few cautions the route went back across the B4576 and down around the edge of Llangwyryfon. Back onto the B road and then down towards Rhydroser before slotting 90 left and onto a unmarked white before heading back across the B road yet again! A blast over the moor to Trefenter and back down south past Mynydd Bach and a give way right, up through TC11 and another trip across the B4576 and into the second LWR. Three more LWR’s took crews into TC12 and the finish of the section south west of Rhydroser. Quickest through the section were Cerith Tomos Jones & Deian Rees (Escort) dropping just 8 seconds with Adrian Jones & Aled Richards (Impreza) close behind dropping 12 and Andy Davies & Lee Taylor (Impreza) third quickest dropping 17 seconds. Quickest Semi-Experts were Arwel Davies & Helen Gilbey (Satria) dropping 1:46 and quickest Novice’s were again Evans/Hughes dropping 1:22.

A short section now just before petrol heading below Llanrhystud with a few sharp corners and a caution slippy to keep the drivers on their toes! As the section was so short several of the top crews cleaned it, top Semi’s were again Davies/Gilbey dropping 15 seconds with Evans/Hughes dropping just 3 seconds in class 3.

Results at Petrol were as follows;

The second half was back down on map 146 starting just outside of Aberaeron where the fuel stop was, a short section again to move crews east and back to the B4337, a nice easy section which everyone cleaned. TC17 started just above Trefilan, going through the village and through Llundain-fach, slotting right over the bridge and along the yellow that runs the other side of the river from the B4342 before heading back across another bridge and joining the B road. Slot hairpin left (No handbrakes allowed though) and into TC20. Another section cleaned by more than half of the field.

A short neutral and quiet through Bwlch-Llan and up to TC21 for the next dropper. Heading north west before slotting 90 right and up to Croes Wyntoed and into a follow arrows section to bring you to TC23 just outside of Bethania. 7 of the top crews cleaned the section with Davies/Gilbey ruling the Semi class dropping 18 seconds. Mered Roberts & Natasha Roberts (Fiesta) were the quickest novices dropping just 20 seconds. A hand full of crews dropping out at petrol moved Davies/Taylor up to first overall 9 seconds ahead of Jones/Rees and another 3 seconds ahead of Crowley/Evans. Evans/Hughes were another crew to retire at petrol, moving Roberts/Roberts up to the top of the class.

Down through Bethania and along to B4577 to the next section heading over to map 135 through Bontnewydd, followed by a small diagram across some grass, which I’m sure was a little slippy after the unexpected rain! Back down to 146 for another follow arrows section and finishing just outside of Blaenpennal. This rally was starting to get harder now with both TC25 and TC26 being droppers for most, Mike Roberts & Justin Davies (Escort) were the only crew to clean this section with Davies/Gilbey second fastest dropping 20 seconds and Tomos Lewis & Marc Hughes (Escort) close behind dropping 28. Quickest novice crew were the current leaders Roberts/Roberts dropping 2 minutes. Davies/Taylor dropped a healthy 1:15 dropping them down to third, moving Jones/Rees up to the top spot and Crowley/Evans in between.

Up the A485 and slot right just over onto 135 for the next short section heading back towards Tregaron, another dropper for everyone this time! Followed by on short section running around the top of the Sarn Helen roman road and back to the A485 just above where everyone plotted the route earlier in the night. Mark ‘GT’ Roberts & Steve Price (Golf) were on it for the last couple of sections setting the quickest time of 41 seconds, second was Stefan ‘DR’ Davies & Dilwyn John (Escort) dropping 45 seconds and rounding off the top 3 was Davies/Taylor and Roberts/Davies both dropping 49 seconds. Tommy Slack & Daniel Belcher (Corolla) were on a late push putting in the quickest class 2 time of 2:31 with Leighton Milner & Dean Wiltshire (106) just 1 second behind and Methuen/Eadon a further 9 seconds adrift. Quickest novices with an impressive time of 1:59 were Roberts/Roberts to take the class win, close behind was Jordan Gullick & Ellie Williams (Micra) dropping another impressive 2:01. Third quickest in class was Jade Phillips & Malcolm Jones (106) with a time of 3:16. A lot of late pushers on the last few sections it looks like!

The final results were as follows;

Well Done to everyone at Barcud MC for the running of the event. Also to all the marshals who stood out in the rain to let us all have fun! Thanks to Rhys for the spin, hopefully I can be better next time after some practice! Another DNF for me on this event so I will hopefully be back next year to break the trend!