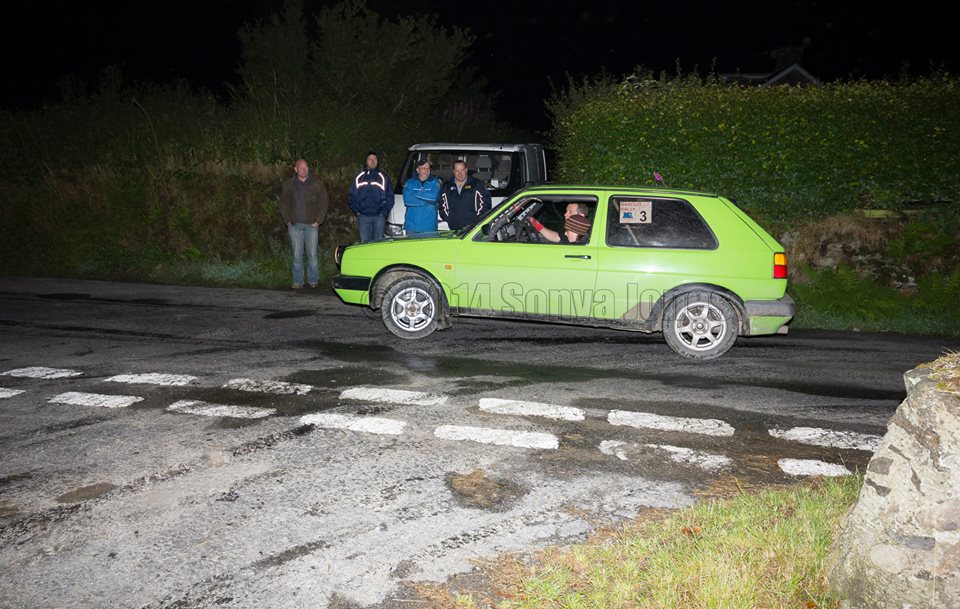 Barcud MC’s Barcud rally started as usual in Tregaron last weekend with a good turn out of entries.

For me, Dan Richards head gasket went on the day of the event so we were out, but I headed up to Marshal for Lewis Morgan and Marc Hughes.

As usual there is always a great buzz at the start of a road rally, several top names covered the top ten with a few quick reserves in places 18 and 41! It was good to see some faces from back down in the South West, Ross Whittock & Andrew Lowe in car 53 and also Dave Clifford & Anthony Evans bringing up the rear at car 75. The Barcud has the competitors plot the route just outside of town to stop spectators looking at the route and heading out where the organisers don’t want them to. As usual a few tests started the rally and a few rumours fluttered around the start carpark of where they were going.

So I headed up to a disused quarry just below Devils Bridge in the hope that they were going through there, with the amount of others up there watching it was pretty certain that they were! What a brilliant place to watch, you could follow the cars down over the hill the other side of the valley and into the quarry and you could follow the cars for just under a minute winding around all the gravel tracks (over a minute for the slower cars). It was hard to see who was who but there were a few who made a few errors. Lewis Morgan and Marc Hughes made a big error going 90 right at a T junction instead of left, sending them out the other end of the quarry and into a maze of unused roads which I’m sure got confusing for Marc trying to follow the rest of the map. Another car headed out over there as well further down the list, possibly Jamie Pearson & Jamie Mills looking at the times.

After test 1 Andy Davies & Byron Jones (Impreza) were in the lead being the only crew to complete the test under 1 minute, with a time of 52 seconds. Second was Owain Evans & Arfon Griffiths in the Ford Escort with 1 minute dead, third in the Volkswagen Golf was Ian ‘Dude’ Roberts & Gwawr Hughes with 1:05, fourth Dewi Davies & Richard Hughes in the Vauxhall Astra GTE (1:08) and rounding off the top 5 was Justin Jones & Nia Hughes with 1:11 in their Ford Escort.
In class 2 Rhydian Morgan & Nathan Davies in the 205 were on top with 1:16, second were both Gethin Davies & Gerwyn James (Corsa) and Mathew Pryce & Joe Taylor (Impreza) with times of 1:28.
Class 3 was lead by Kevin Ephraim & Wenna Roberts (Fiesta) with an impressive time of 1:12, second was Daniel Davies & Ben Birch (Colt) with 1:21 and third in their Impreza was Ashley Saunders & Rhian Richards with 1:25.

Quickest thought test 2 were Morgan/Hughes dropping 22 seconds, 2nd Davies/Jones and Alex Crowley & Richard Williams (Satria) dropping 28 seconds. Quickest in class 2 was Davies/James dropping 46 seconds and quickest novice was Ephraim/Roberts dropping 45 seconds. Davies/Jones were still leading with a time of 1:20, Evans/Griffiths were still in second with 1:36 and Davies/Hughes have moved up to third with 1:41. Class 2 was still lead by Morgan/Davies with 2:04 and class 3 was lead by Ephraim/Roberts with 1:57.

Rhodri Evans & Emyr Jones were quickest through the final test in their escort dropping 27 seconds, second quickest was Davies/James dropping 37 seconds and third quickest were both Steve Knibbs & Gerwyn Barry (Satria) and Rhys Wyn Davies & Cadog Davies (Satria). Quickest in class 3 was Dafydd Evans & Tomos Evans (Escort with 44 seconds. The top 3 stayed the same as after the second test with both class 2 and class 3 leaders not changing.

The crews then headed into the lanes and back into 146 to take them to Petrol halt at Aberaeron. Evans/Jones had moved up to the lead dropping a total of 2:18 with Roberts/Hughes and last years winners Jones/Hughes both of 2:44. Morgan/Davies were still leading class 2 with a time of 4:38, only 20 seconds ahead of second. Meredith Roberts & Natasha Roberts had moved up to first in class 3 in the near standard Ford Fiesta with a time of 5:17.

I was positioned at PC27, the last PC of the night just before the finish North West of Tregaron. Andrew Jones & Max Freeman were visually the quickest through the PC, it was a little amusing how many of the Novice crews asked where they were or what PC/RC I was, we were all there once! There were several cars missing by then and the running order was all to pot, but 90% of the crews looked like they were still enjoying the night. Everyone thanked me as well as a “coo-coo” from car 20… Thanks! And just down the road was the finish!

Well done to Dude & Gwawr on the win, these Golfs do have some pace! Well done also to Barcud MC for running a successful night!