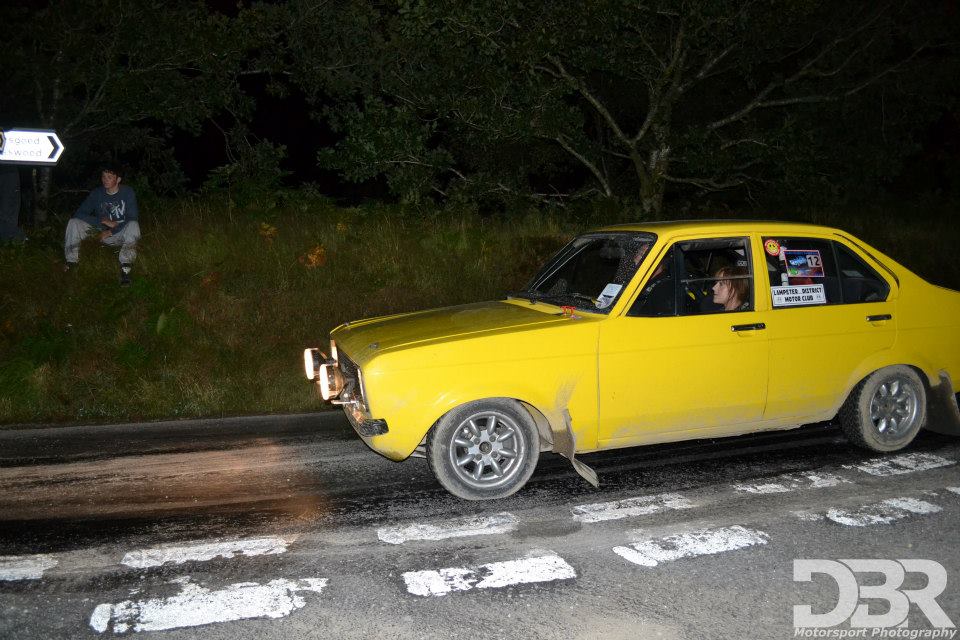 I’ve never done the Barcud before so didn’t quite know what to expect on the way up from Swansea. Taking a different route through Llandeilo to drop something off and then up to Tregaron. Trying to follow Google maps is not the easiest thing to do in Wales due to the signal problems the deeper you head inland, so after missing my turn off the A40 I thought I would gamble with the next road! Why have I never been this was to Lampeter before? The A482 headed straight into Lampeter and had some brilliant little sections of road on it!

Anyway! Finally got to the start in Tregaron, followed in by Kevin Wills & Liam Burns all the way from the deepest parts on Devon! (Just a short 9 hour round trip, as you do!) I was quite surprised to see how quiet the carpark was actually, only a handful of cars there, usually you have a few more going through scrutineering early just in case!

The carparks soon filled up, the day turned to night and it was time for everyone to head down the road to do the plotting away from speccies. There seemed to be a lot of time to get the route down on the map, with a few dodgy references that didn’t work, but most crews were out of the cars and talking for the last half and hour before people were setting off.

Then it was off, straight into the special tests. Sat at the start of the first test you could see the cars in-front going up the track and being chucked around, these weren’t going to be smooth, and they weren’t! A little too rough for my liking but a lot of people seemed to love it! Maybe it would of been nicer inside something like a scooby rather then a 1400 Nova, but still good fun anyway!

On to the tarmac now, there seemed to be quite a few road sections which turned out to be a bit tedious and annoying later on, but sometimes they are needed to get to the good stuff! We seemed to be going alright, only dropping 1 or 2 minutes outside of the tests, but then a rattle started. As the car is freshly build Rhys wanted to jump out and check what was wrong! The top nuts on the coilovers had rattled loose, possibly from the earlier tests, they were tighten up a little and then we carried on to petrol so we could sort it out better then and have a look.

There seemed to be a time recovery section between MC2 and MC3 in a lay-by before petrol, which was on a road section to try and keep to flow through the garage going. So we took a few minutes to sort out the suspension and then head off, back on our original due time. When turning the engine on to head away from MC3 the battery light came on and left no other dash lights. At petrol we had a quick look, thinking it could have been the alternator belt that had snapped, but everything seemed all OK. After firing it back up everything was working again, but the battery light still on, the only thing being affected was the power to the potti, making my ancient old thing very dim and quite hard to use!

Big push after petrol! Also Rhys knew the area so we had a little bit of an advantage. Unfortunately the potti caused a couple wrongly called diagrams, but we managed to get around them only losing a few seconds. After TC16 was a slot 90 right, through a ford and then 90 right by Trefilan. Some brilliant drifts on the slot and on the 90 right after getting the tyres wet through the ford! We were flying now! Down to PC24 where we slotted left into a farmyard and around a few bales (diagram a little dodgy, which caused us to almost go through some tape and the wrong way around a bale, wrong slotting into the control), and then stop at the PC. While stationary Rhys noticed steam coming out of the engine bay while I was getting the time card signed. On through the farm and the DSO on the exit where the whole front of the car was covered in steam! So we pull over and game over! Suspected headgasket failure as the coolant reservoir was boiling over and chucking all its water about. Not a happy engine! As it’s freshly built we stopped there and called it a day.
After watching the others go through and letting the engine cool Rhys topped up the water and limped it home to get it back.
Got to say thanks to the guys who dropped me back to my car at Tregaron! Sorry I wasn’t very chatty! Keep meaning to learn some Welsh! Haha!

Thanks to all of the Marshals who stood out through the night, more to the guys who had late controls and had to withstand the rain! It got heavy by the end!!

Have to say a HUGE thanks to Peter Barnard and Kevin Clark who Marshalled for us. Peter was navigating in car 30 and Kevin was coming up to share the driving between them, so I collared him to Marshal for us, only for Pete’s entry to be pulled on Saturday morning due to car problems! But still coming all the way from Exeter in Devon just to Marshal and watch the night!

Well Done to Barcud MC who put on a great event! Been a lot of praise on the British Rally Forum about the rally being better the previous years! Great event in my eyes!

Thanks also to Rhys for taking me for a spin in the Fresh Nova! Good luck on the Breidden with Mark Rodway!

Kidwelly Targa next for me, something a little different!

Thanks to DA Photographic (www.daphotographic.co.uk) and DBR Photography (www.facebook.com/dbrms) for all of the photos! Head over to their websites for more photos and for contact details to buy yourself a copy!