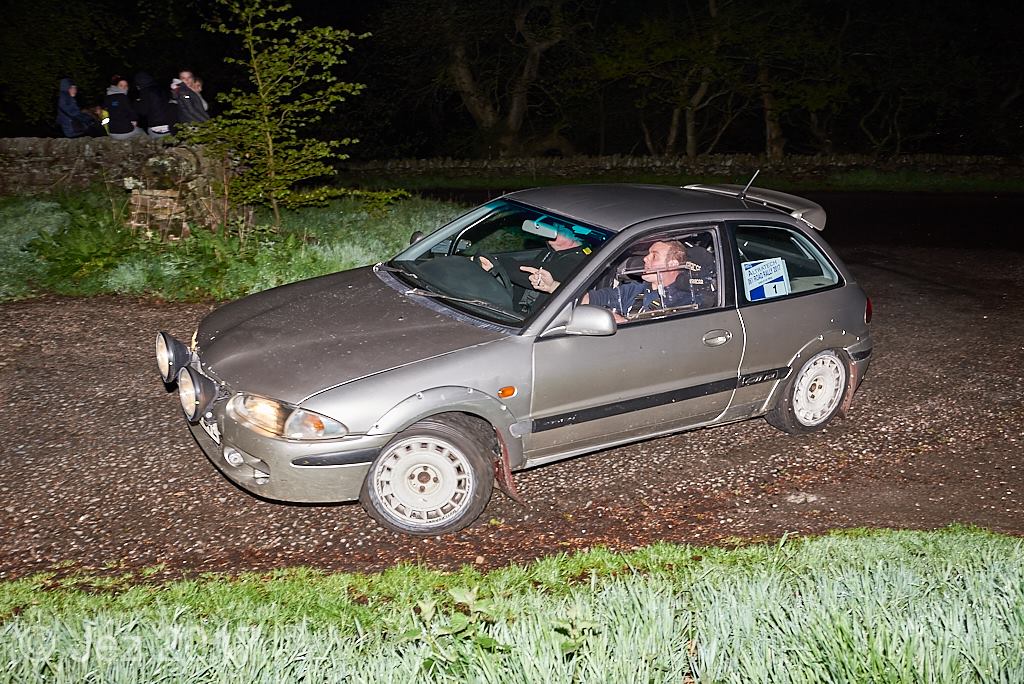 The 6th round of the ANCC road rally championship started under dark skies and following a week of rain, but that didn’t spoil a good night of motorsport. Hemingway/Collis returned following the latter recovering his ability to speak. Championship leader Waller was seeded at 13th showing the depth of quality fields in Derbyshire always generates, the potential winners could have come from the top 20 cars.

As is traditional the event started with 2 tests round Flowflex, run the opposite way round to 2016 but still slippery with little to gain from being “the more flamboyant driver” as the regulations always suggest. With no breakdown of results available we can’t speculate but with a quick shunt at the hairpin Hemingway and Collis got off to a shaky start. A large degree of misfortune befell Featherstone and Spencer with a broken shaft off the line and they had an early bath and significant set back to their championship ambitions.

The plotting took us to familiar opening ground, Goyt Valley but using the NAM car park from South to North and then into the forest. Briant/Evans were flying here but misjudged the L9 into the control and slid wide, costing them nearly 30mins in penalties, with a similar issue ending Hawkins charge in the quick Proton.

The plotting at this stage was taking the format for the rest of the evening with the majority being delivered either plot and bash or with 1 section in advance to get it down, it was still tricky though. The route went down past Jenkin Chapel, which is a fantastic piece of road and then into Macc Forest. We then took in a rough white towards Roach end with a somewhat confusing junction at the end of it. Some of the lower cars like the MX5 took this section a bit more gingerly but it wasn’t as rough as what was to come!

Using roads to the east of Dove Head saw us transfer east across the map. Most of the time to the minute sections were cleanable which provided a bit of respite before the IRTC’s where you had to be on it, as much as the whites would allow.

Our final dropper of the first half came to the North of Chelmorton which was a very rough white with NAM bends requiring caution. Results at halfway showed Robinson/Bryn Jones leading from Heminway/Collis, Green/Gibbins and Blacker/Frost with only 30s or so covering them. Bossen/Vokes suffering with fuel pump maladies and Standen/Taylor with power steering pump failure slowing their charge which was to come in the 2nd half.

The 2nd half started to the North of Buxton and when a Police car rolled down past the start there were a few worried drivers, but with the route using some tricky whites straight away there was no issue, a useful NO board blocking the farmyard and helping crews. A further tricky to find slot towards Wheston saw a few crews returning for second bite only to be delayed by a suspected drunk driver driving the opposite way down the road and making a mess of reversing.

Longstone Moor was to follow although the double no entry signs with no arrow caught a few crews out, the correct route progressing straight past them with no indication in the handout. A blast down the white to the first of two droppers in the 2nd half saw most drop a minute with Hemingway/Collis just over 20s.

Starting again from Foolow we took in the whites near Bradwell which were cleanable as the route progressed to the final dropper round the Donkey Sanctuary to the east of Chapel en le Frith which was in great condition, smooth and with crests to challenge the drivers since navigators had nothing on the map to assist.

Results showed 2 exclusions which were not anticipated which shook the results up a bit, Robinson and Storer for seemingly not SGW in a neutral, one set of several DSO groups recording the incident. Hemingway/Collis once again took the top spot with good results for ANCC contenders Blacker Frost 2nd, Green/Gibbins 4th, Jagger/Carr in 14th. Newby/Waller fell foul of unlucky 13 with crank sensor issues, persevering with a bodged loom to get them some useful points in 21st although losing ground in the championship.

Next rounds at the GP Memorial and the Jackson Trophy on 17th/18th June, the events clashing but not expected to reduce entry numbers on either.

Thanks to Jez Turner (www.facebook.com/jez.turner.161) for all of the photos. Make sure you check out his page for more examples and for details on how to purchase yourself a copy!