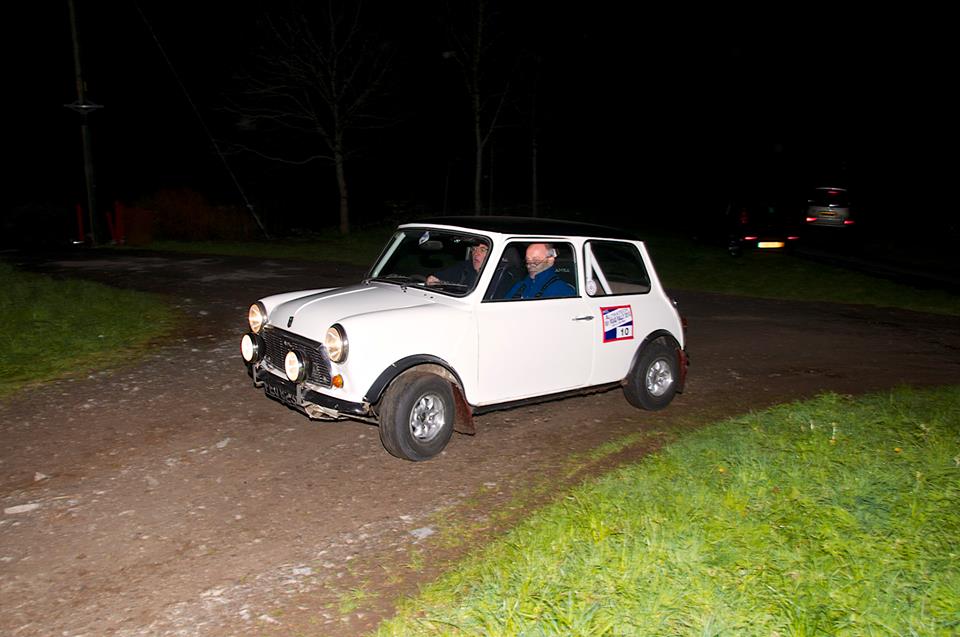 This was out first attempt at the Altratech, we gave it a miss last year because the Whites wouldn’t have suited the Clio at all. The 205 cope so much better on the rough stuff and given it is a round of the SD34 championship and has a good reputation we decided to give it a go. The Regulations has a sample of the navigation we could expect on the night, it was all to be done off printed maps supplied at the start. I got it in to my head that this would mean it was pre-plot and it was only with a few days to go I read a bit closer and realised it was actually run as a Navigational Event. On that basis I thought it might be a good idea to check the sample navigation, couldn’t be too hard could it?… erm… it was!!… It was very confusing actually. I hoped it would be better on the night.

For some reason 061 have a slightly different way of forming classes to most events and we were back running as Novices and seeded fairly low at 47 out of the healthy 60 car entry, which I found a little odd. I decided it was because we hasn’t done the event before so they give better places to those returning. There was a really good atmosphere at the start, scrutineering and documentation were slick and well organised the venue, Altratech’s valve factory in Buxton was well equipped for our needs.

The clerk of the course also took time to explain to me and a couple of other who asked how the navigation worked. There were a few tricks I wasn’t used too, the ‘London Maps’ system has numbers scattered around randomly on them, some section were to be set by following these number, but not in numerical order, also some of the numbers were decoys and not used. Other section were on tulips, except not all the roads were shown, if a white wasn’t to be used it didn’t appear on the tulip, the same went for Herringbones. Tulips were numbered, but arranged out of order with gaps in the number sequence. It sounded logical enough, but I still couldn’t get the example to work… The timing also promised to be trick too, being a navigational, they were running some regularity section with secret IRTC’s, penalties would apply for early arrival with no waiting outside controls. You could however ask for your minute at the end of an regularity section, but not at an IRTC… confused?… many of us were!

Running 47 meant we had a fair wait to get going, but we kicked off just after midnight with two special tests around the perimeter of the start venue, the first was a bit of a mess for us. The 205 is on a single carb and it suffers fuel surge sometimes on sharp bends, it did it with a vengeance this time and bogged down badly giving us a time of 38 seconds. The second run was better a full 4 seconds quicker a respectable time given the 1.4 engine in the Pug.

It was a short run out to the first section then into the real event. The first section looked very much like the practice one, (in fact I think it was the same but I still can’t figure out the practice nav!) and it was bit of a struggle, I had a fair idea where we were supposed to go, but there were a number of cars around us that had other ideas. After a bit of puzzling we managed to find the end of the first IRTC without actually going off the route, but dropped 3.10 in the process.

The next bit caught us out by being easier than expected and we booked in a minute early. Two more sections packed with code boards and with tricky tulips went well enough with no time dropped (or gained!) and brought us to the start of the Black Harry quarry complex near Stoney Middleton, a local delight which we hadn’t had experience of before. There was a nasty little trick right at the start with this, a NAM about fifty yards into the section with a code board followed another fifty yards latter by a passage control. Lots of crews were caught out as they charged off into the section before reading the instructions, only to realise they had missed the NAM.

We were lucky (or more switched on???) and realised just in time to turn sharp left into the NAM and pick up the board, just as the car in-front of us came back head on at us having doubled back. The rest of the Black Harry section was very tricky for us, the navigation around the whites wasn’t easy and we wrong slotted up a blind alley looking for another NAM a penalty of 6.35 was the price but at least we had all the code boards. The next section was a Herringbone we waited at the start and watched the car in front (car 49 Storer/Fenton) as they set off after a quarter of a mile they slotted left, giving us a pointer as to where to go. Come our minute the instructions came through the window and Steve shot off after car 49 as I got to grips with the Herringbone, except something didn’t stack up and it took me a few minutes to realise the left slot was wrong! We doubled back just as car 49 reappeared! Then had a cracking run around the yellows to the next IRTC, just squeaking in our minute just behind car 49 again! We later realised the wrong slot had done us a favour, loads of crews had been caught out here and booked in early, some so early they incurred a fail for breaking the dreaded three quarter rule. The final section before the petrol halt had a confusing divert for a white which was too rough, the handout was wrong but we followed everybody else and ended up in the right place at roughly the right time too, though we did drop a couple of minutes dropping down a really rough white (god knows what the original one was like!)

The second half started with a cracking run up the Goyt Valley, the mist hampering our progress somewhat, but we pushed on and just dropped a minute, though the mist caught us out, as we later found we were penalised for missing a code board, I never noticed it on the time-card at the time tough. The next section had a ridiculously rutted white near Dove Head, dropping us a minute with another minute going on the next section. The short section from S16 to ITRC17 was tight with a Herringbone and three code boards to contend with and we lost 3.17. A couple more minute went by on some more rough sections before we arrived back at the Black Harry quarry complex. This was the final fling of the event and started with a very steep rough white, blocked by a dead Peugeot and rock-fall from a hole in the wall, (I don’t think the two were linked!). We just squeezed past and scrambled up through the ruts, doing our best to follow the vague instructions, arrows and other cars around the rough roads of the quarry. Frustratingly we lost the last code-board of the event somewhere in the darkness, dust and mist and dropped a further 4.25 a fair proportion of it due to the blockage early on.

It was a steady run back to the finish venue the Waterloo Pub near Buxton for an excellent breakfast. The event had been a struggle for us, the navigation instructions were tricky to follow and we never really seemed to get into a rhythm, I wasn’t expecting much of a result. A few discussions with other competitors has us wondering though, a rumour was buzzing about that a lot of people had really struggles, a number of the front runners had fallen foul of the tricky NAM at Black Harry and others had collected big early penalties and fails for missing controls. Early results however looked pretty good for us, the first half had us in a top twenty position, though the two missed code-boards in the second half took us down to 23rd overall and third in class. We narrowly missed the award for beating the seeding, that went to our friends in car 49 who finished a vary creditable 14th and won the class.

The event has caused something of a storm in Road Rally circles, the top five retired, some through mechanical issues, but others along with a number of other crews gave up as they were simply not enjoying it. I do wonder however what a rally organiser has to do these days, our last outing on the Illuminations ended well for us, but again with a lot of disquiet but that time for the opposite reason as it proved to be too easy. The main argument with the 061 seems to centre around the navigation instructions. I’ve send these out to a number of navigators to get their opinions, they have some back vary from tricky to downright impossible. I’ve been through them again myself and to be fair they do work, but missing the unused white and the gaps in the numbering system were confusing on the night. Let’s all collectively move on then, next us is the G&P Memorial, hopefully the balance will be right and we all have a good event.

Thanks to Jez Turner (www.facebook.com/jez.turner) for all of the photos! Head over to their website for more photos and for contact details to buy yourself a copy!